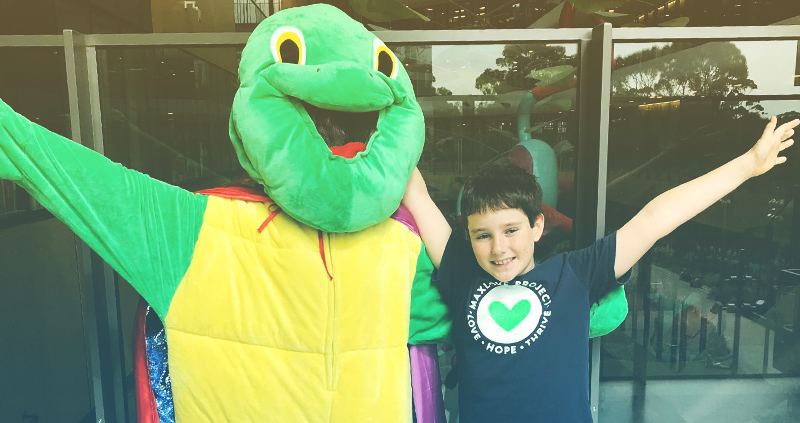 In December of 2016, following three months of bake sales, overwhelming support from Bryce’s school (St Andrews on the Gold Coast) and our other partner organisations (Cloud b, the MaxLove Project, and ANZCHOG) and truly generous donations from friends and family, Bryce had raised enough money to purchase 244 Super Max the Turtles to give to children with cancer. Here are some pictures from our journey and each of the eight children’s oncology hospitals we visited. We hope these pictures put a smile on your face as you look at them. 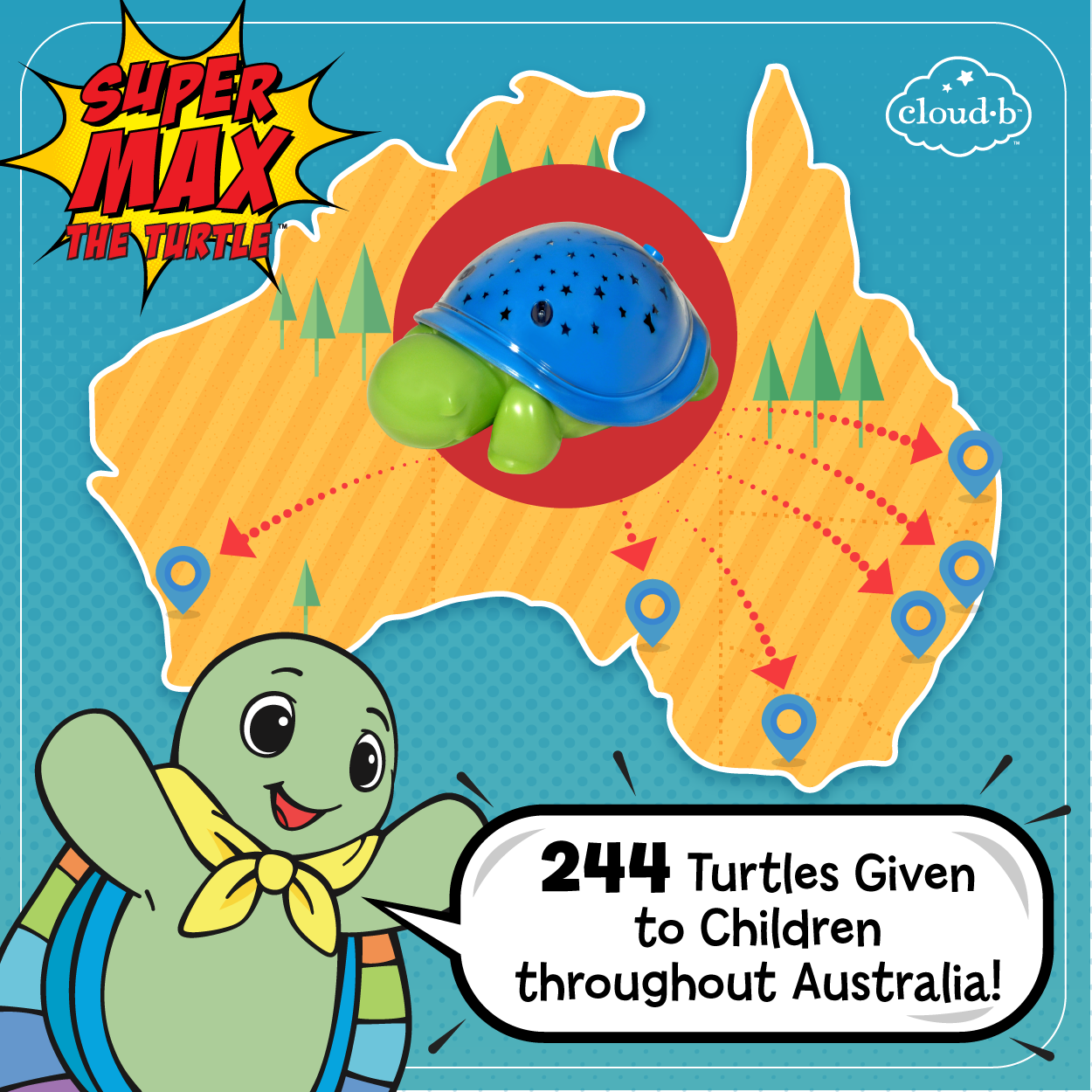 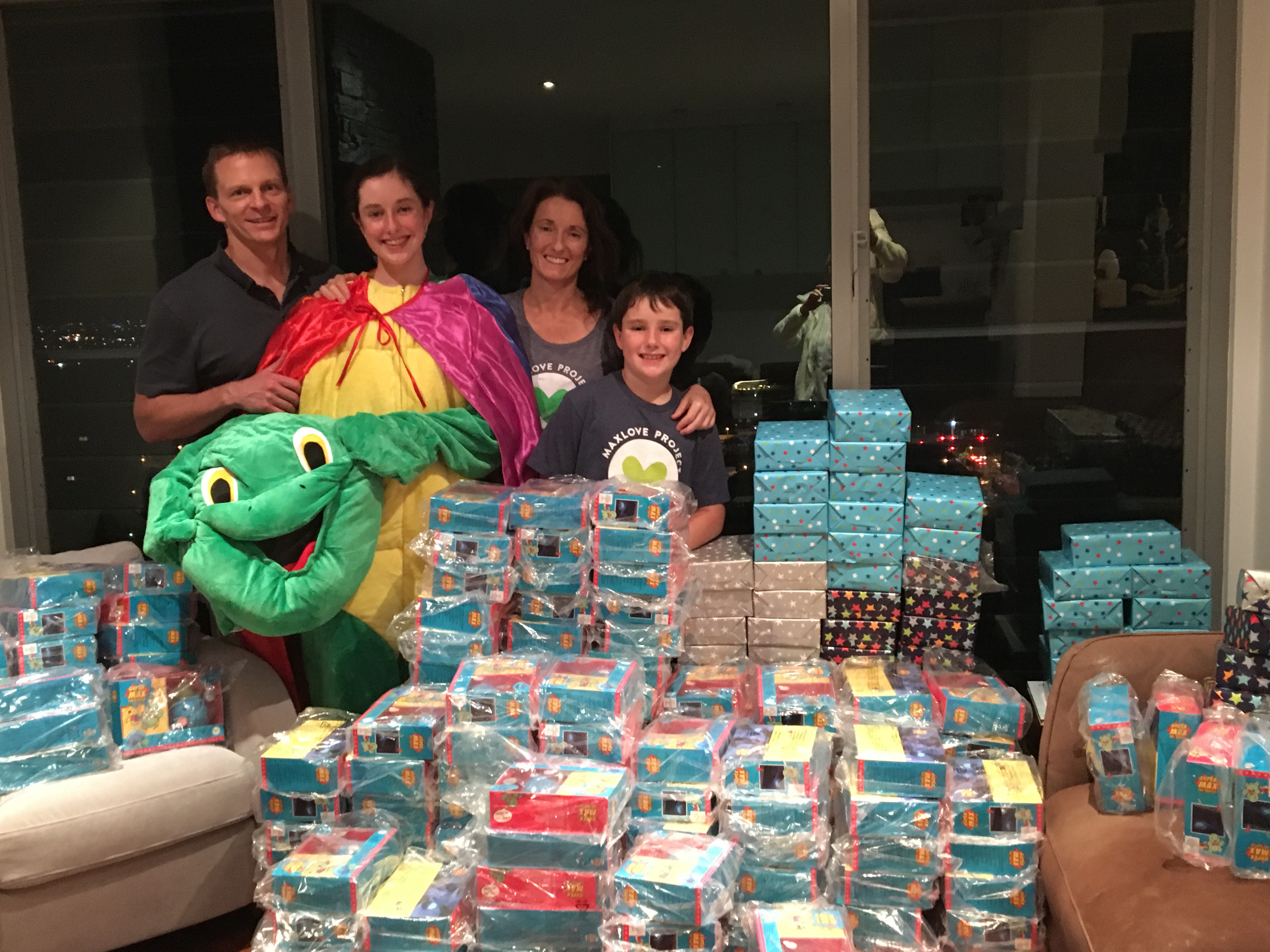 Every child who is in the hospital over the holidays deserves to feel special and comforted by getting a Super Max the Turtle. We need to keep baking cupcakes so we can make that happen.

These were Bryce’s words when he found out that there would be over 100 children in the hospital over the holidays. With the support of so many people around him, Bryce had smashed through his original goal of getting six Super Max the Turtles and had enough to purchase 56 of them. However, 56 wouldn’t be enough for every child who was in treatment over the holidays. So we set to work. In the end, the final number was 244 turtle night lights.

Getting ready for the trip was a lot of work. Bryce thought that a wrapped present would be so much nicer to receive than an unwrapped one, and this journey was about making children feel special, cared for and comforted, so wrapped it was. We found some lovely star covered paper to go with the star-filled turtle shells. Bryce’s Grandma Sky flew over from America to bring us the turtle costume (we had to sew on the special blue star covered shell because Super Max the Turtle doesn’t have a regular green shell and “the kids would notice” reflected Bryce). With some help from Bryce, Grandma Sky spent the better part of two weeks wrapping the boxes. They looked stunning! 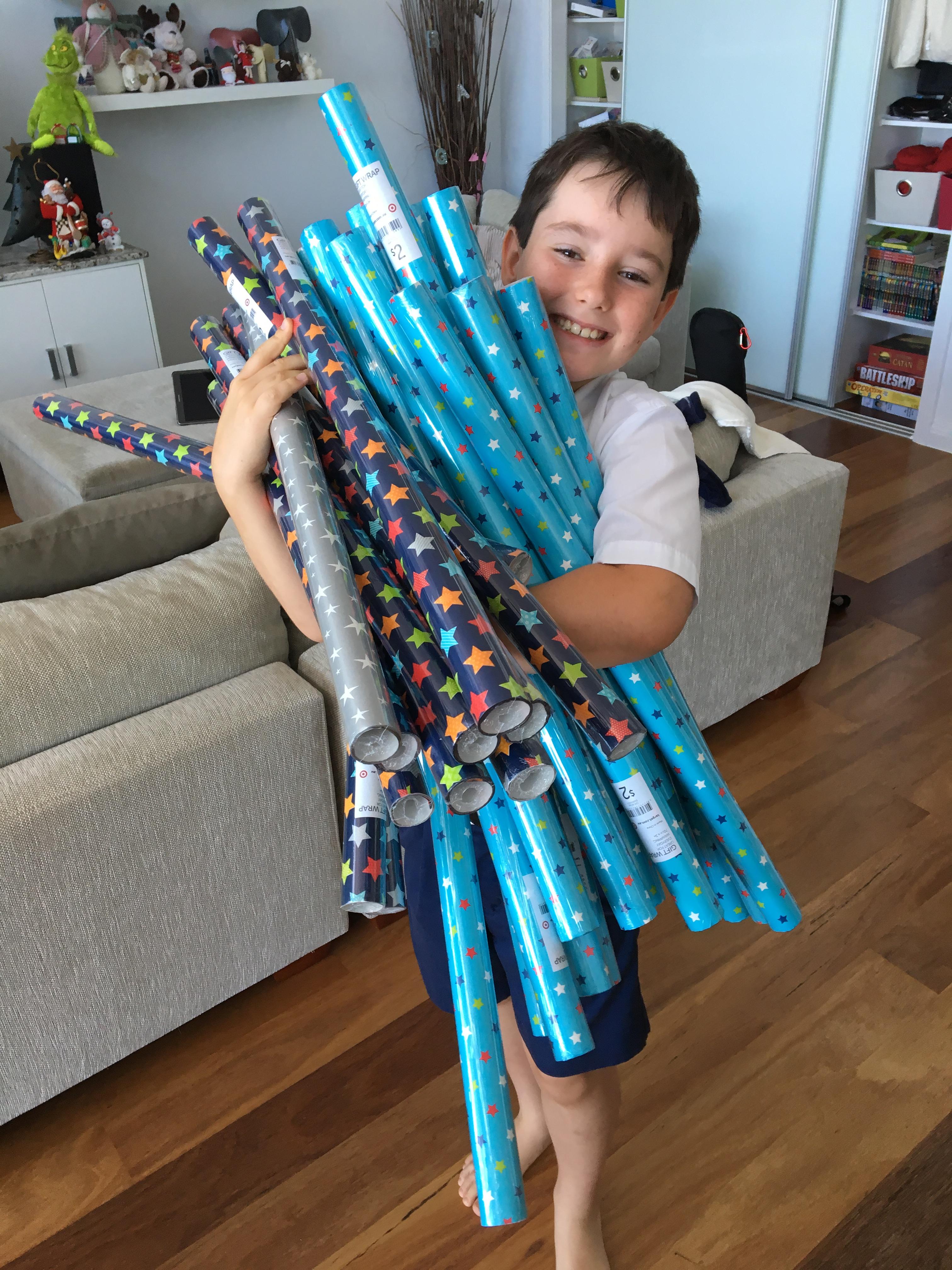 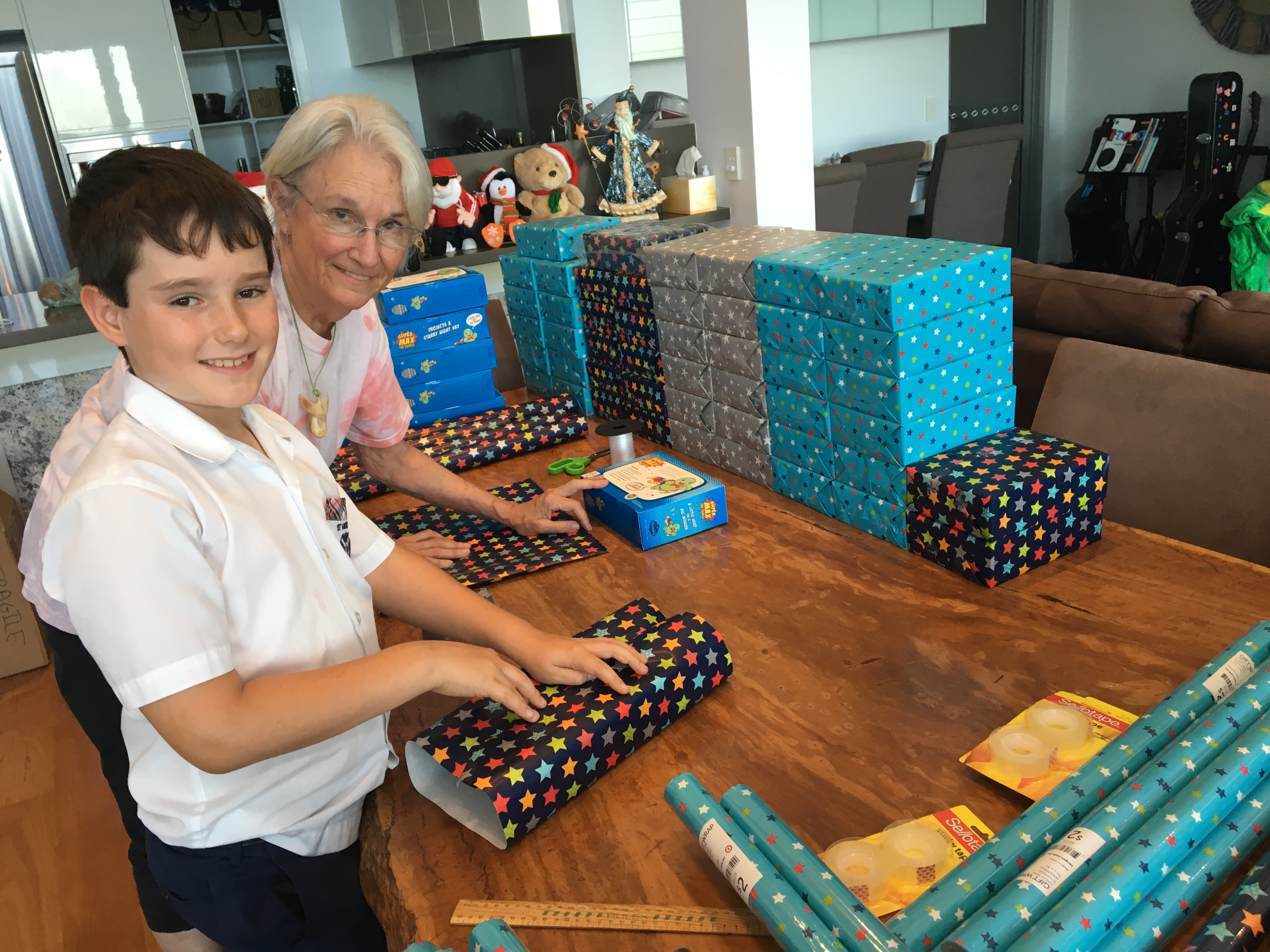 Our first stop on the journey was the Princess Margaret Children’s Hospital in Perth. We were a bit nervous as this was our first visit and we wanted to be respectful of how difficult time in the hospital can be. We know this from Bryce’s mom’s time in the hospital (she has had seven major surgeries related to her cancer). We couldn’t have been more surprised by the warmth, happiness and color throughout this beautiful space. We met so many fantastic superkids who had smiles from ear to ear. One of our favorite visits was to a boy in isolation, he loved turtles and so we went outside into the magical outdoor play space and waved at him through the window. He watched as we put his special wrapped present into his personal mailbox just outside of the window and he smiled and waved at us (his mum said it was his first smile in days). Our hearts melted with happiness. It was a beautiful day filled with love, hope and happiness. 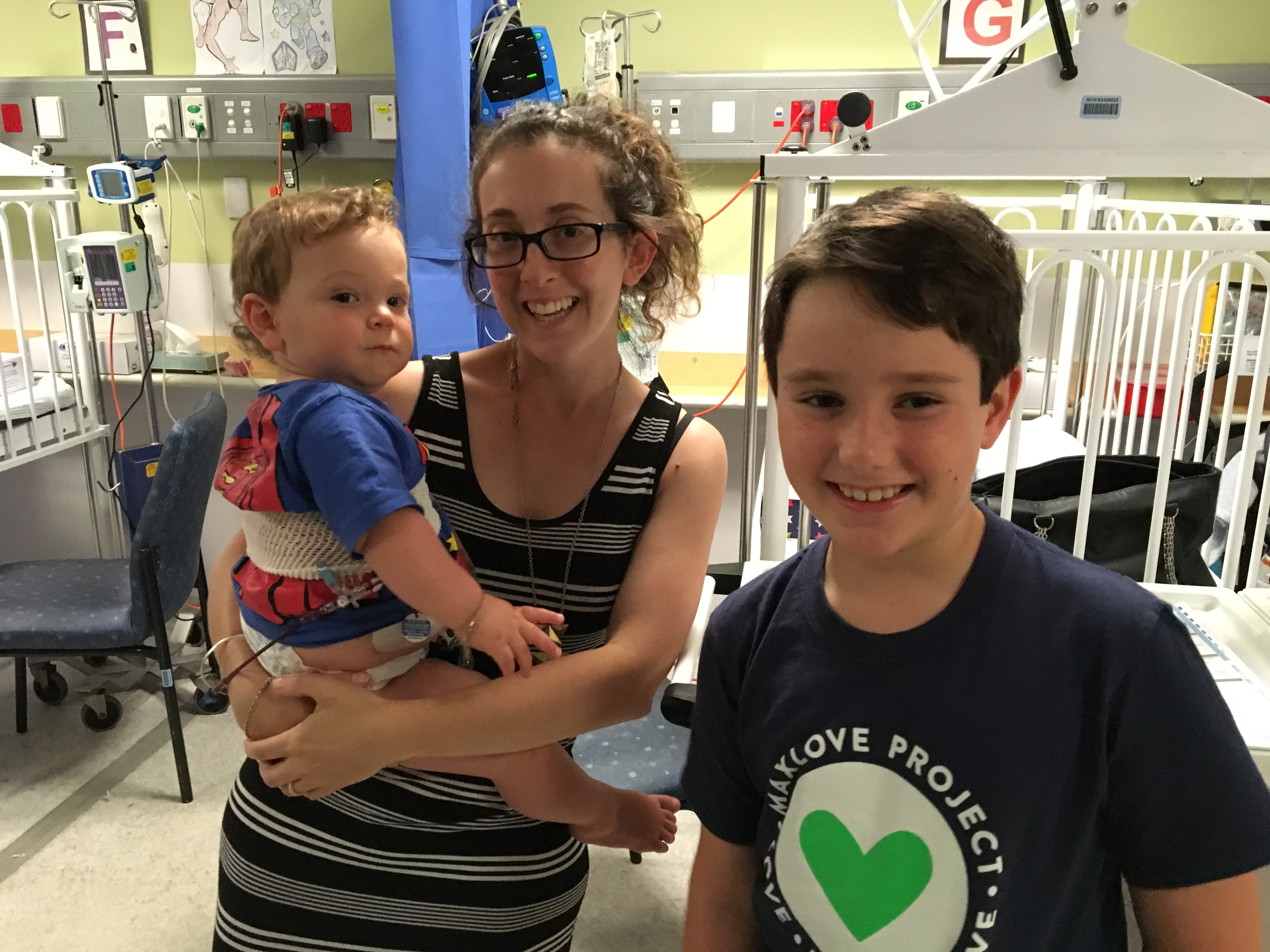 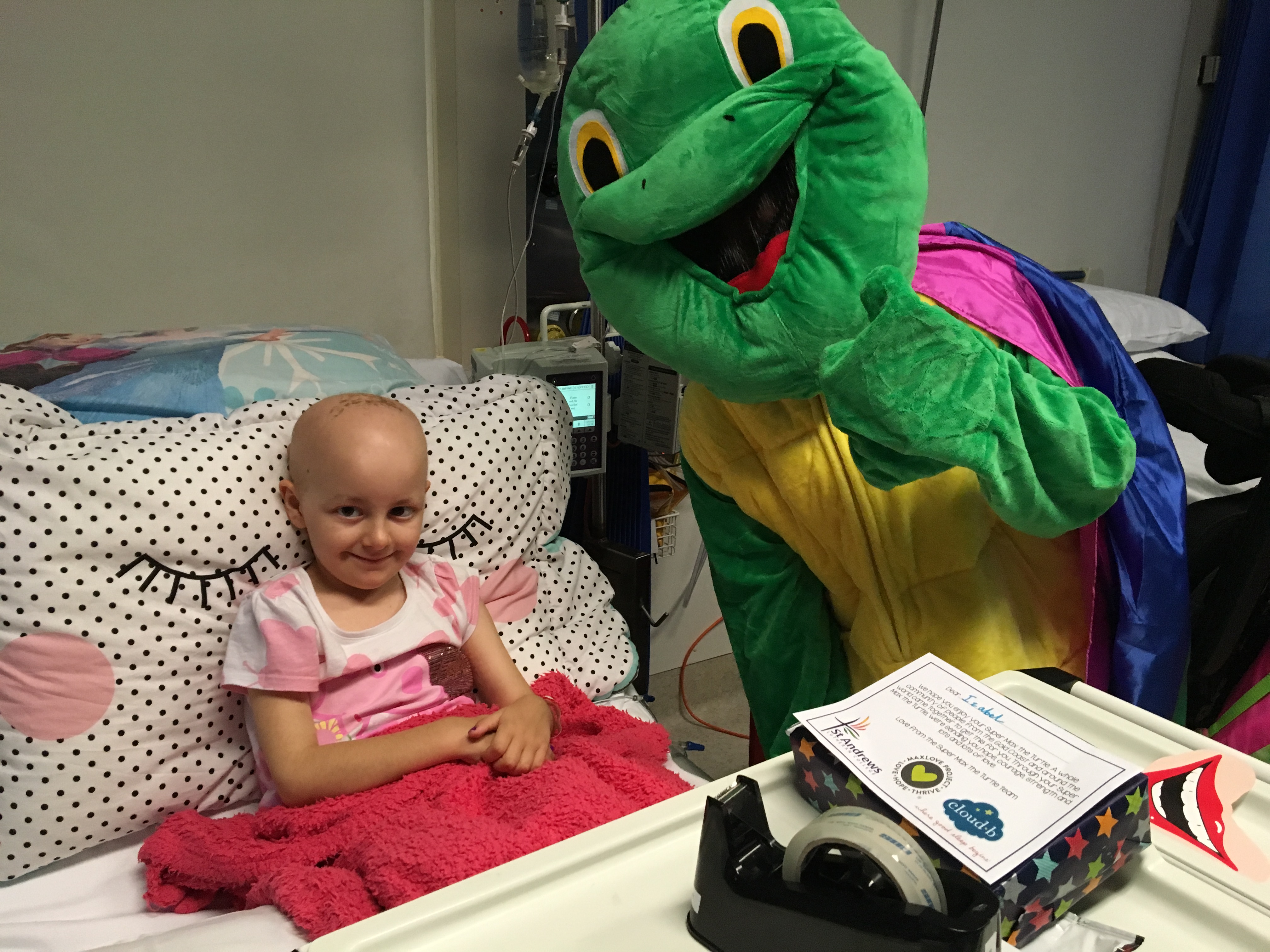 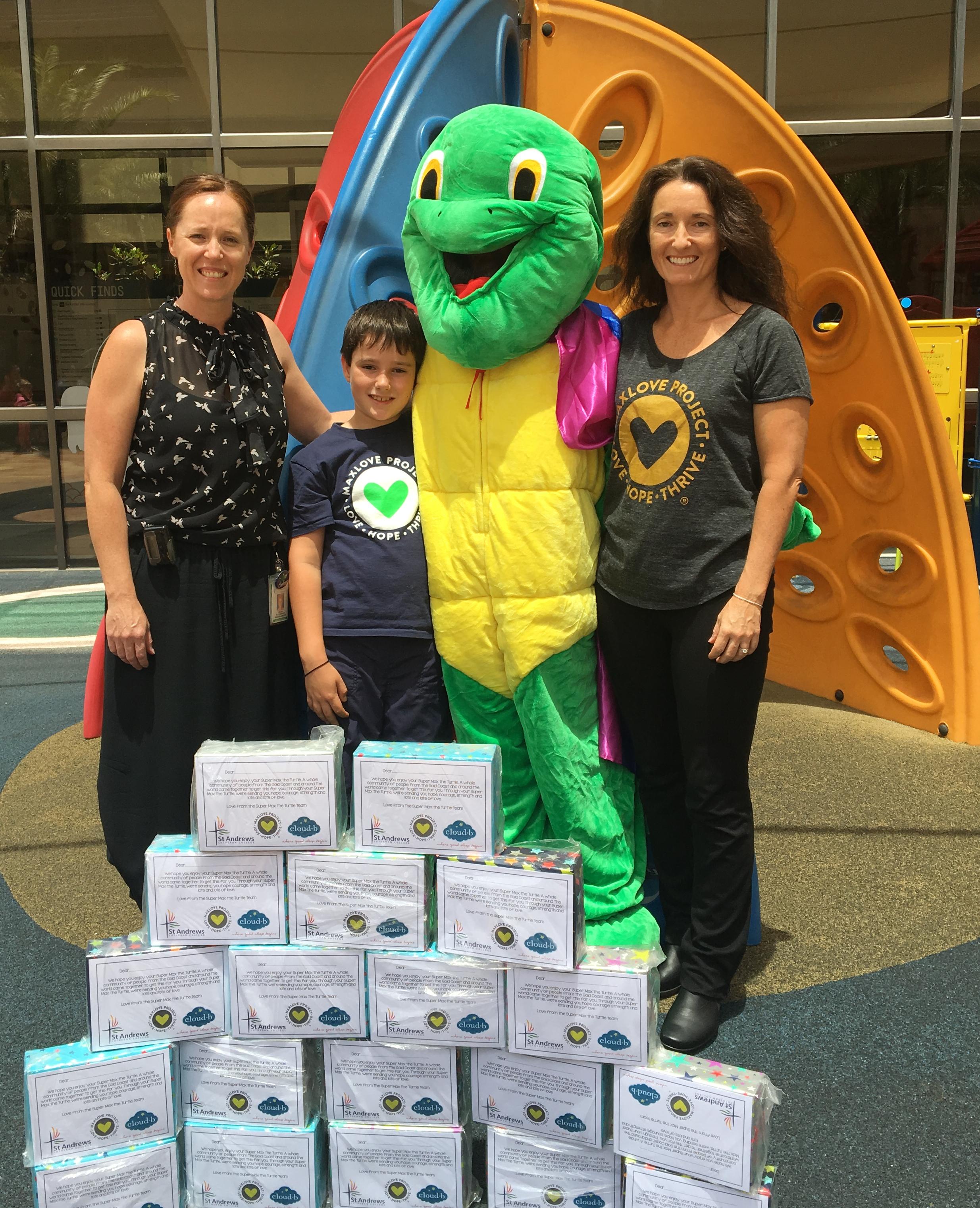 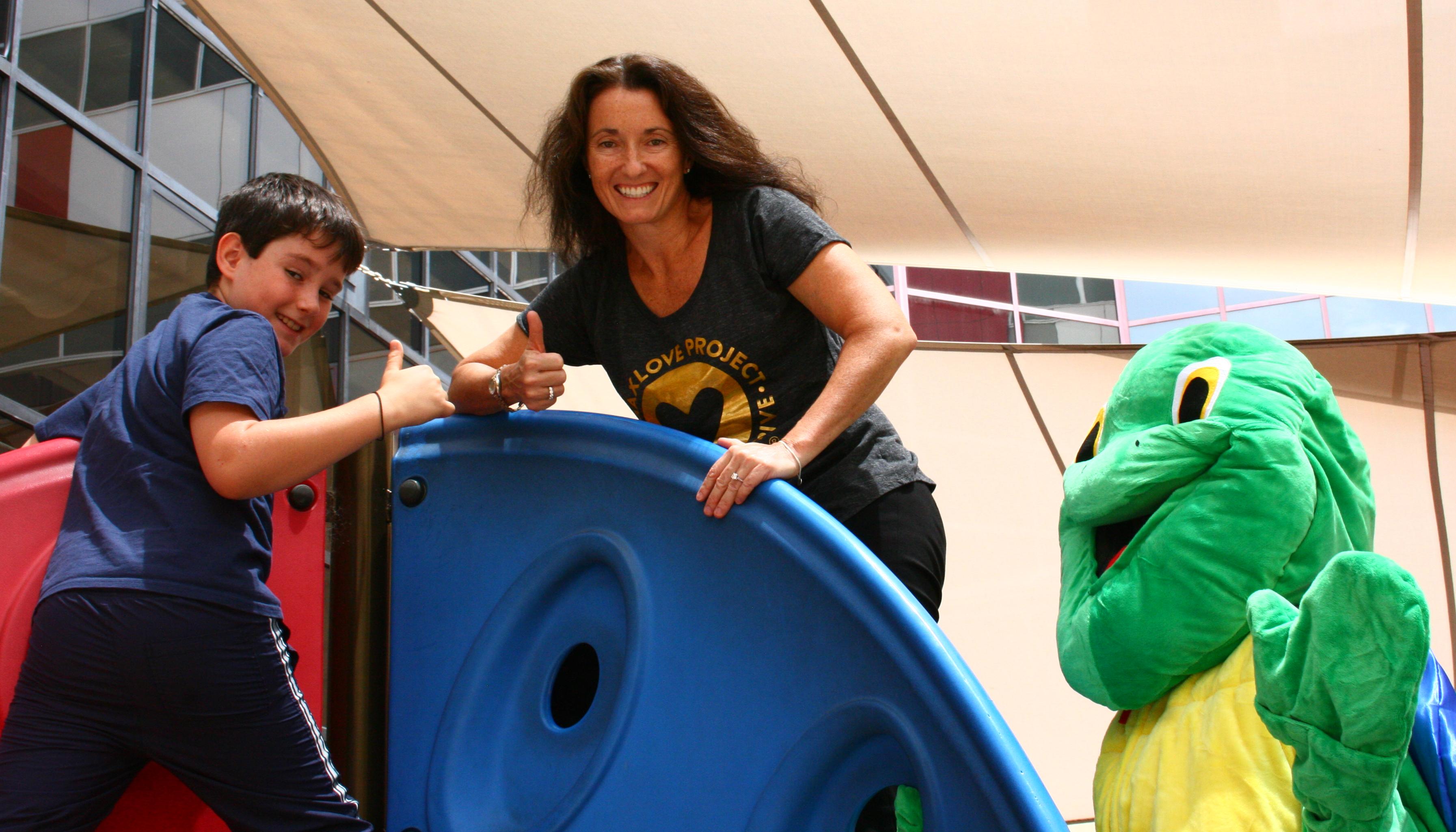 Our first stop in Melbourne was at the beautiful Royal Children’s Hospital (this hospital is right down the street from the hospital Bryce’s mom, Amy, goes to – the Peter MacCallum Cancer Centre). We had a truly wonderful experience here meeting so many superkids and their superparents. We visited the play room, the day treatment centre and some of the wards during our visit. Everywhere we went, there were smiles and happiness (the little kids always love meeting Super Max the Turtle and giving him “hi-fives”). The children, families and staff here are all such gorgeous people. There really aren’t words for the caring that exists in this large community of families dealing with cancer, of which we are all a part. 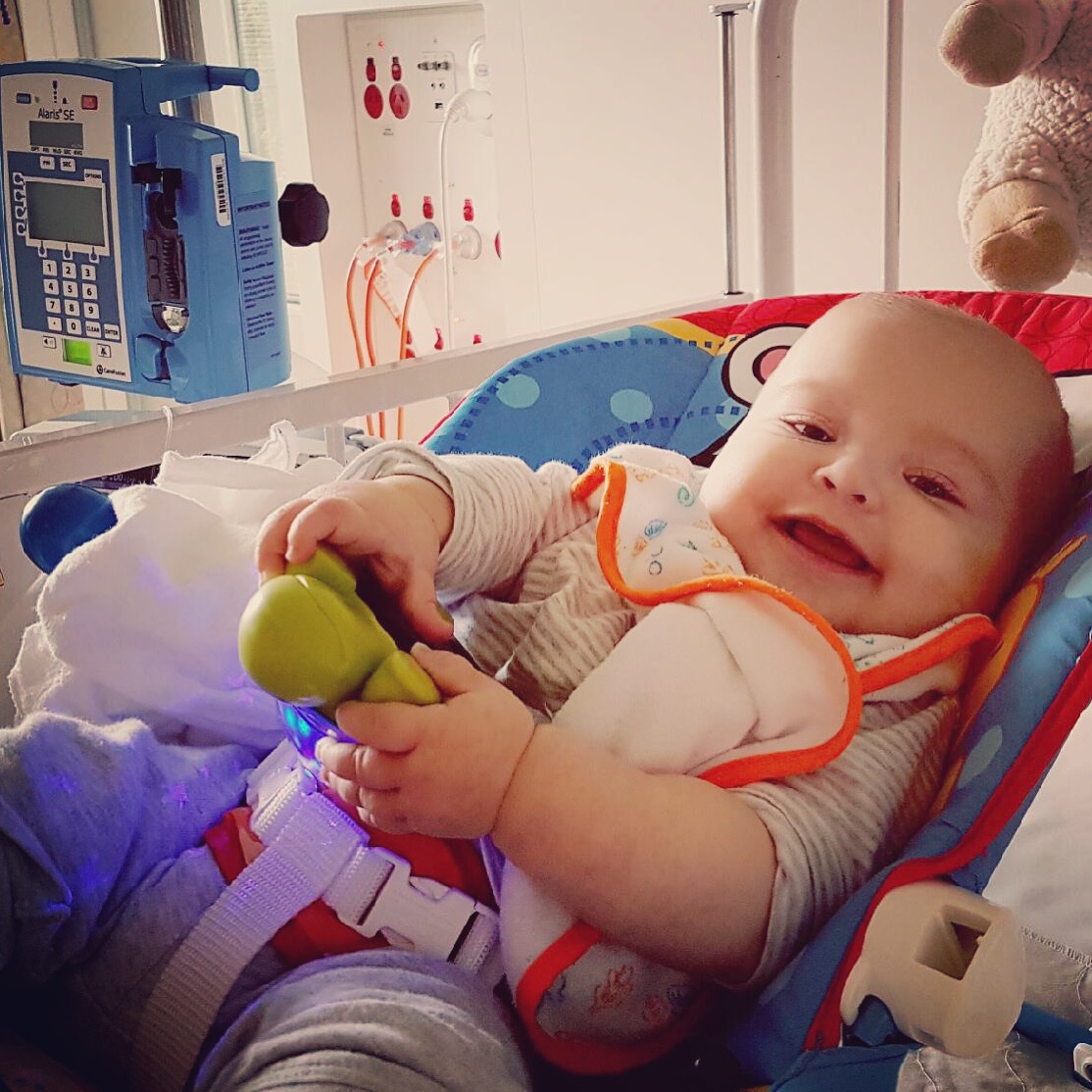 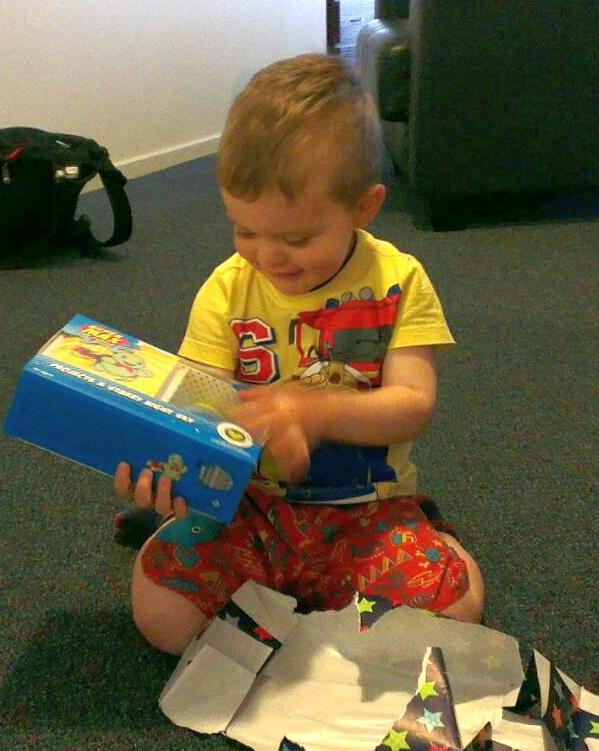 Magic in the Middle

Melbourne was our biggest day during the entire journey. We were at Royal Children’s Hospital in the morning and then took a taxi to head over to the Monash Children’s Hospital for the afternoon. As we sat in the taxi debriefing what had happened at RCH and talking about what would happen at Monash, something magical happened that will stay with us forever. Our taxi driver turned to Bryce and asked him to share a bit more about the project and why he was doing it. As our 50 minute ride continued (there was traffic that day), our driver shared that he had a small child of his own, a newborn in fact, and he was so touched by what we were doing that he wanted to make a donation right there in the taxi. As we were sitting in traffic that had stopped, he pulled out two $10 notes (which we still have taped to the wall in our study) to make a donation. We were absolutely gobsmacked by his care and generosity. This was a very special moment for us demonstrating, once again, that there is beauty, compassion, connection, love, kindness and gratitude in the world everywhere we turn.

In the middle of our taxi ride between hospitals, our taxi driver who had been listening to our debriefing discussion of what we had done and were about to do, pulled two $10 notes out of his pocket to make a donation. We were absolutely stunned at his kindness, compassion and generosity.

Our second stop for the day was at the Monash Children’s Hospital in Clayton, VIC. We were particularly excited about this stop because our new friend and program partner, Robyn Strong, the Executive Officer for ANZCHOG, works at Monash so we were to meet her in person for the first time at this stop. The hospital team at Monash was truly wonderful, helping us visit children in the day treatment area and on two of the wards. We spent more time than we expected here because everyone was so wonderful. Bryce read the story of Super Max the Turtle to children in a number of the wards as the walking, hugging and “hi-fiving” turtle we had with us generated smiles and laughter everywhere we went. This was a fantastic stop with beautiful, caring people at every turn. We met so many superkids of all ages here – and every single one of them was super brave, super strong, super positive and just plain old super all around! And sometimes it’s the superparents who need a hug and a smile… and we’re always happy to give both of those out. 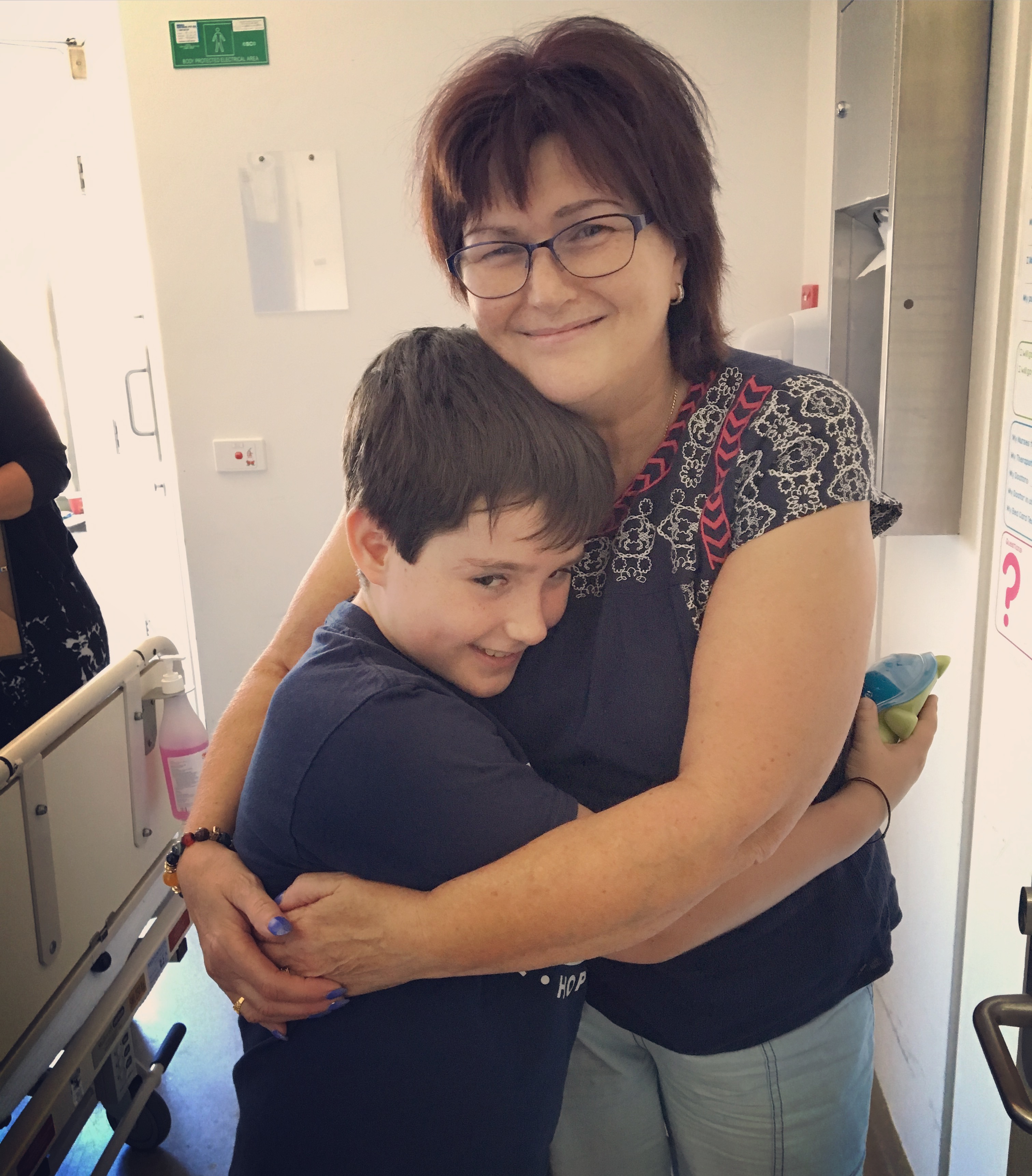 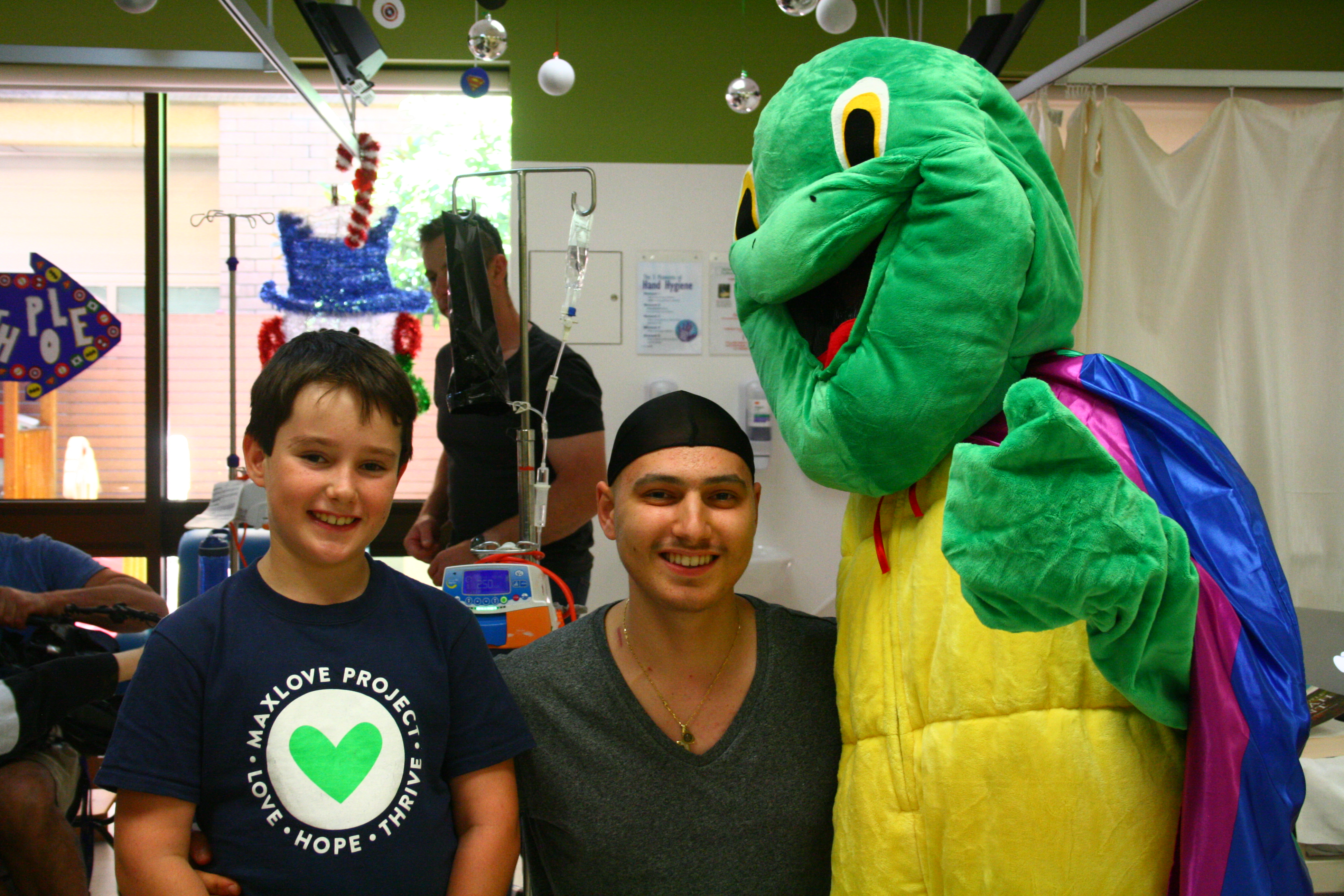 Our next two hospital visits were in Sydney. We were very excited! Our first visit was at the Children’s Hospital at Westmead where we had yet another amazing time. The children we met were all so happy to have a tall furry visitor and another one (a bit shorter and much less furry) with a special present for them. We laughed, hugged and smiled our way through this lovely hospital that is filled with caring people who will do anything to help the children and families who are there.

Our next visit was to the Sydney Children’s Hospital where we met children in treatment of all ages. It was another day filled with laughter and smiles as we made our way around the ward handing out special presents that made the children happy. Bryce read the Super Max the Turtle story again and again as the children wanted to know how their magical new turtle night light friends had come to have special powers to comfort those they are with. We absolutely loved our time in Sydney and laughed our way through the day with the beautiful staff and families there.

We arrived at the John Hunter Children’s Hospital a bit later than we had planned because of flight delays and traffic however we made it just in time to see the last few patients at their day clinic. We were so happy to meet a beautiful young girl who was having her last treatment. Her entire family had made the long journey to the hospital with her so they could all be there together for her “last chemo” (see the beautiful sign her family made to celebrate the occasion). We were absolutely thrilled to be able to give her a Super Max the Turtle to celebrate her special day. We went on through the wards to meet more superkids and their superfamilies, sharing laughter, smiles and love everywhere we went. The staff members at John Hunter were so wonderful to be around – their sole focus was on doing whatever they could for the children and families there. Sometimes, a warm blanket is all it takes to brighten someone’s day (a special turtle present is pretty good too!).

Our last stop was in our home state of Queensland at the Lady Cilento Children’s Hospital in Brisbane. This was a very special stop for us because it was the place where Bryce could fulfill his original goal of giving six turtle night lights to children with cancer from the area where we live. We were also thrilled that we would be able to meet Dr. Chris Fraser, a paediatric oncologist at Lady Cilento and the Chair of ANZCHOG (our new organisational partners who believed in the health/comfort benefits of what we were doing so much they helped us to organise visits at each of the hospitals). It was another wonderful visit filled with happiness and smiles. We visited a number of wards and shared stories about our trip and the many beautiful people we had met along our journey. The staff here were so unbelievably warm and loving. They showed us the special bell that every child gets to ring at the conclusion of his or her treatment. There are signatures of every child who has rung the bell around it – a permanent display of hope and bravery. Every child who comes in here has the goal to one day ring the bell. The children and families we met here filled our hearts with love, gratitude and warmth. We left there with a joy and happiness that is beyond words to express.

Following this visit, we knew what we had to do. If there were going to be 800 children diagnosed with cancer in Australia in 2017, then 800 turtles is what we would get for them. Every child who is going through this terrible treatment regimen deserves a special friend to take everywhere that comforts them when they go to sleep. Every single child. 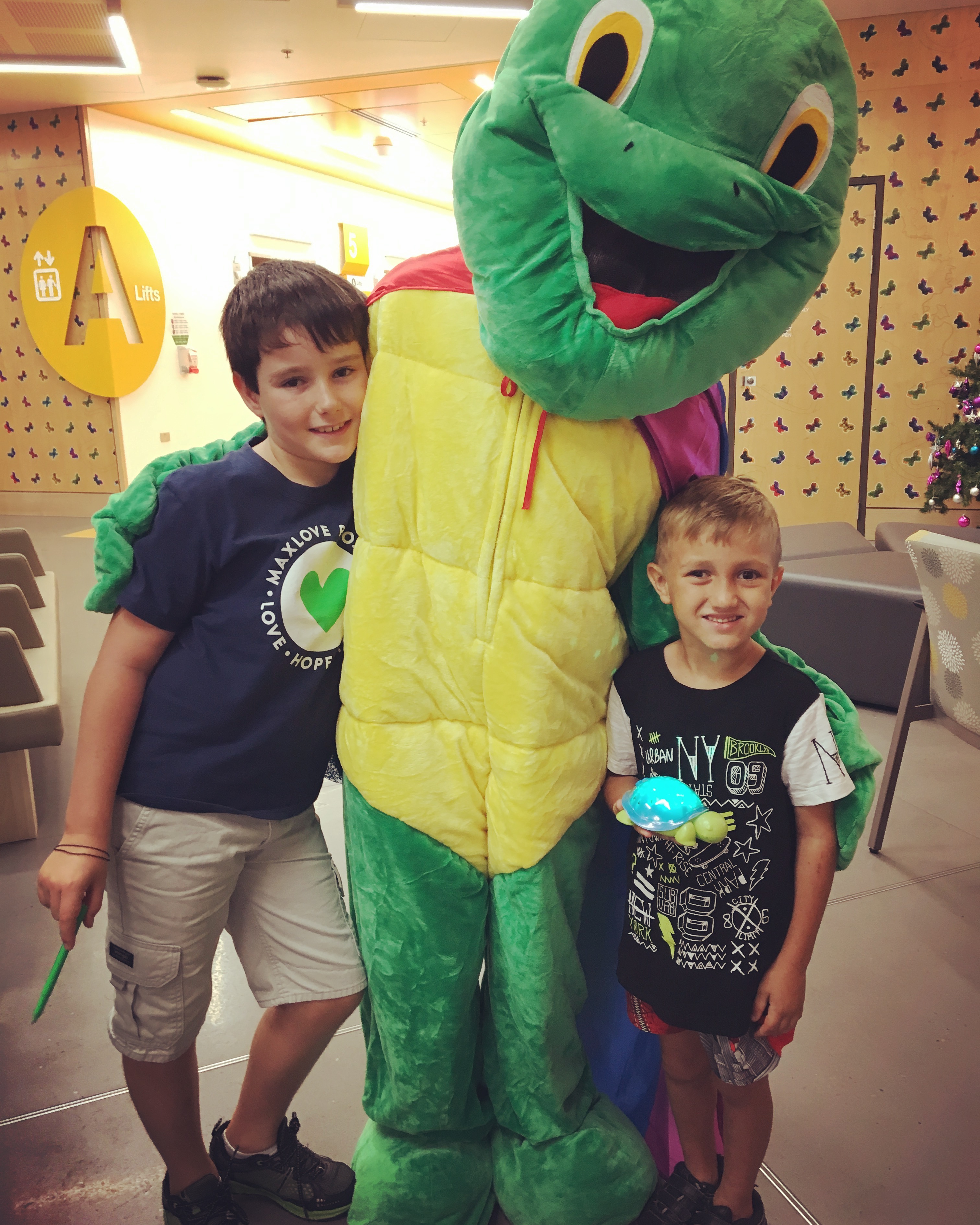 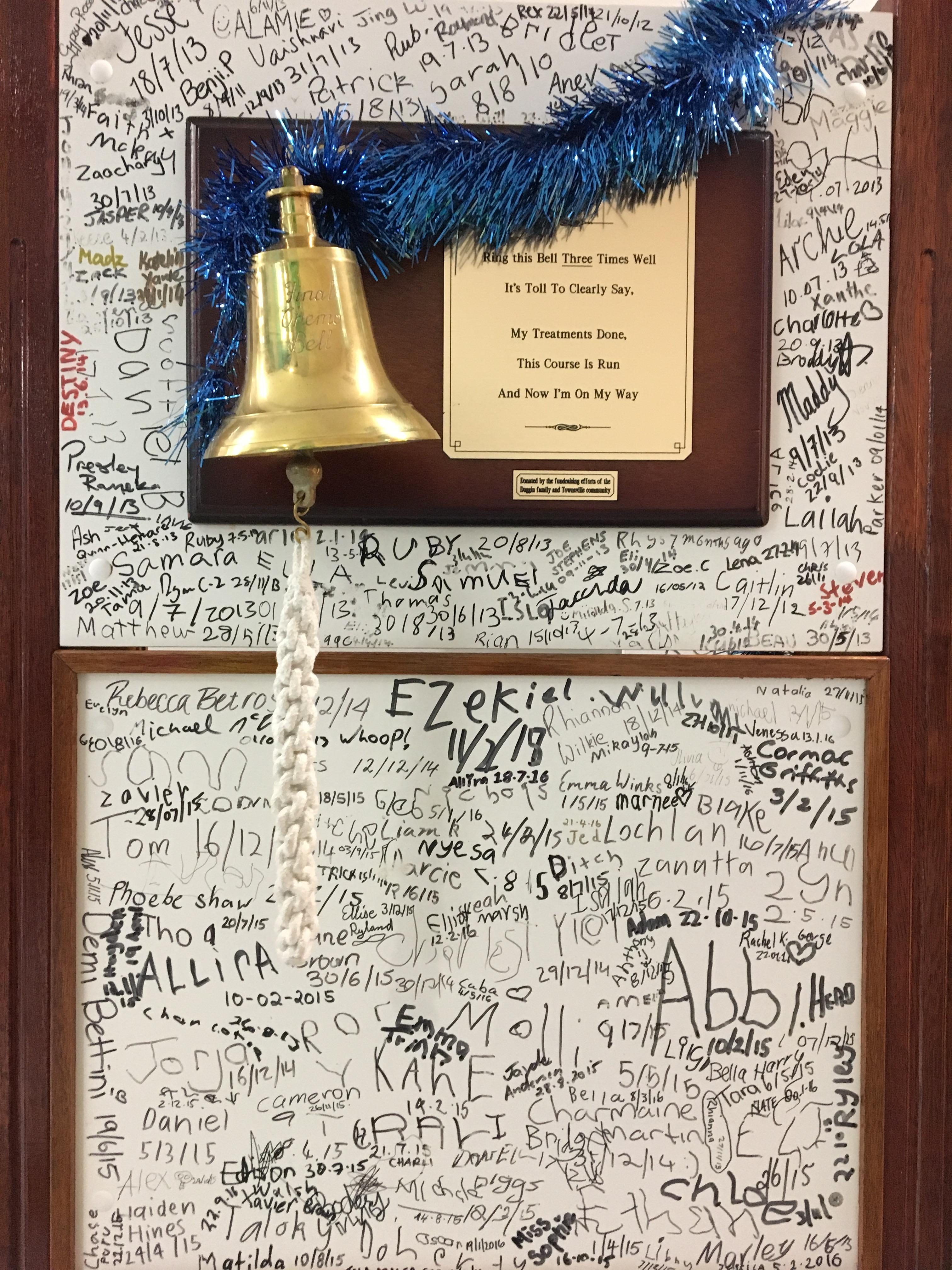